It's a Red Dog's Life

Add Training to My Topics 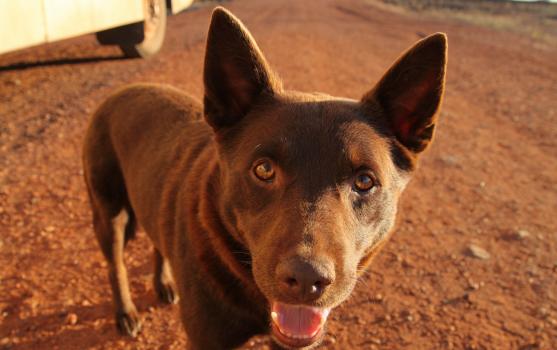 Me Koko, me Red Dog.

Ever wanted to know what life on a film set is like for elite canine stars? Local hound Koko hit the big time when he was plucked from relative obscurity to star as the fabled Pilbara hound in Red Dog, a feature film based on this inspirational true story. petpages caught up with this down to earth kelpie ahead of the release of the film on DVD (December 1), to find out how life has changed.


How did a small-town kelpie wind up on the big screen?

“I was just a show dog in Victoria when the makers of Red Dog discovered me. I’d done a few dog shows and was used to performing for an audience, but I tell you a film set is a whole different experience! I think I really found my calling. Woof! Since the film came out I’ve been on quite a few TV chat shows too.”


What is so great about kelpies?

“We kelpies love the outdoors and we’re built to run around for hours. We’re also good at learning things, like herding sheep or movie scripts.”


How many dogs auditioned for the Red Dog role?

“It took the producers and Kriv (the director) a while to audition for the role, mainly because they had to travel to us, rather than the other way around!  Have you seen my audition tape? It’s on YouTube. I really turned on the charm for Kriv that day.”


Were you intimidated playing the role of an outback legend?

“I was a bit nervous and didn’t want to forget my lines, but once the camera rolled it all came naturally. I think acting is in my blood, woof!”


What is your favourite scene in the film?

“I had a lot of fun filming the beach scene where I steal the steak from the barbeque. Listen, I’ve not told anyone this before, but I worked out if I ran off in the wrong direction, chased the make up girl or tried to chew the microphone, the director would call “Cut!” and we’d start the scene from the beginning again. With a new steak each time…”


Did you have to undertake a gruelling training schedule?

“I worked with my own personal trainer – Luke – for a few months. He is the best. He has worked with all sorts of celebrity dog actors, even ‘Bouncer’ from Neighbours! He taught me more than 50 different tricks that you can see in the movie. My favourite was crawling backwards - that was a tough one. I got an extra special treat when I mastered that!”


What was the most challenging part in the movie training-wise?

“I wasn’t so keen on the bar scene with all the shouting miners and the live chicken. It wasn’t so much the chicken but seeing all those hairy legs in those tiny shorts, howl!”


Did you have a decent trailer on the shoot?

“I’m more of an outdoorsy type than a diva dog, so my trailer was pretty simple really. I had air con to keep cool in the Pilbara and someone to scratch behind my ears – that’s all this hound needs.”


What was on your rider?

“I’m pretty easy going, so all I asked for was a bowl of water and none of that fancy stuff either. Straight from the tap was fine with me!”


How do you keep in shape?

“I love to go for two long walks a day and chase the birds (although they stay on the lookout now).”


How do you keep your coat so shiny?

“A good bath every now and then really helps, as well as all the usual things a celebrity does to look good – lots of water and exercise!”

“I love chicken flavoured dog food for everyday meals, but of course I love a doggy treat or two. My trainer Luke knows that I always give my best tricks when he gives me a sneaky sausage or slice of bacon.”


Who do you prefer for company – people or dogs?

“I like a mix of both. My owner, Nelson, is loads of fun, and takes me for long walks everyday. We also visit the local café sometimes and they bring me a bowl of water whilst Nelson has his coffee. I usually meet up with a few of the local dogs there too. It’s a great spot to catch up on the canine gossip.”


Is there a lady in your life at the moment?

“Well, I am still in touch with (co-star) Rachael Taylor on Skype.”


How was she to work with?

“She was just lovely. She gave good chin scratches, one of my favourite of all the scratches.”


What’s your advice to other dogs looking to get into the entertainment industry?

“All any dog needs is patience, affection and friendship. And like humans, some dogs are better actors than others. Woof! My audition video on YouTube really helped showcase my acting skills… but every dog’s a superstar as far as I’m concerned. Woof woof!”


Will you act again or are you now officially retired?

“I am now officially retired! Once we’ve finished all of our media commitments and fancy things to promote the DVD release, I am just going to enjoy a dog-of-leisure lifestyle… long walks, big bowls of food and having my belly rubbed. I still get told off for chewing the furniture. Some things never change…”

Could Pets Secure our Mental Health?